Although you might already have a particular personal reason for climbing Scafell Pike, here are a list of challenges that include the mountain. Maybe one of these challenges will be your reason to climb – or your reason to come back and climb it again.

There are many well known challenges which include Scafell Pike. It’s such an iconic mountain that it’s included on many lists and itineraries in the mountain walking and running community. Here’s a small selection of some of the better know challenges.

Alfred Wainwright’s famous Lake District guidebooks listed 214 peaks throughout the area, including Scafell Pike. Many people like to try to “bag” all of these peaks, slowly ticking off more with each visit to the Lake District. Trying to do the Wainwrights is a great way to explore lesser visited areas of the National Park, as well as the popular summits. It’s common to leave a favourite mountain for last to make the celebration even more special.

Although it’s not about speed, many endurance athletes have attempted to do all the Wainwrights in one go over recent years. In 2019, Paul Tierney broke the record that had been standing for five years. His time was six days, six hours and five minutes.

The Bob Graham Round

One of the classic Lake District rounds, the Bob Graham round involves visiting 42 mountains (including Scafell Pike) on a route which starts and finishes at Keswick Moot Hall. The Bob Graham Round is, typically, a fell running challenge. Runners aim to complete the round within 24 hours and the current record knocks many hours off that. For the attempt to be official, then there must be pacers and witnesses on each of the tops. However, there is nothing to stop anyone from using the round as a basis for their own, unofficial walking challenge.

As you would expect, the highest mountain in England forms part of numerous charity events. A number of charity climbs feature not just Scafell Pike, but a series of well-known peaks, either local or national.

Friends, family and colleagues may be persuaded to sponsor you for your efforts when they hear Scafell Pike mentioned. Including a mountain in your fund-raising efforts shows people how much energy you are putting into your challenge.

One of the most famous challenge walks to feature Scafell Pike is the National Three Peaks Challenge. Although not necessarily a charity challenge, many people choose to do it whilst raising money for a good cause. The aim is to climb the three highest mountains in each of England, Scotland and Wales in 24 hours. As well as Scafell Pike, the other two mountains in the challenge are Ben Nevis in Scotland and Snowdon in Wales.

It’s true that you have to be seriously fit to climb the three highest peaks in the mainland UK in one day. But relax. It’s not that bad. You will be driven from the foot of one peak to the start of the next one, so there is a chance to get some sleep in the van. Some people even start the timer from the top of one of the summits and finish at the top of the third, so the first ascent and final descent can be outside the 24 hour time limit. Of course, there’s nothing to stop you completing the challenge at a more leisurely pace.

Scafell Pike also forms the centrepiece of the Five Peak Challenge, an advanced mountain climb. Participants climb five of the highest summits in the Scafell Pike region, again aiming to do so in just one day. The peaks are Allen Crags, Bowfell, Esk Pike, Great End and – of course – Scafell Pike.

The time it takes to complete the Five Peak challenge depends upon fitness, the experience of similar terrain and weather on the day. The event offers a choice of fitness level groups so that even slower or injured walkers can take part too.

The idea of the Five Peak Challenge is to walk nearly twelve miles in gruelling conditions up some of England’s highest mountains. Yes, it’s an ‘ask’. But the event helps raise money for the worthwhile cause of Marie Curie Cancer Care, which cares for our terminally ill.

The really adventurous can try their hands at the Ten Peaks challenge, which wouldn’t be complete without Scafell Pike.

Be warned! The Ten Peaks organisers say: “This is a tough challenge that will test your endurance and strength. Your mental and physical strength will be tested to the max.” Difficult terrain, lengthy descents and steep ascents feature all along the way. ”

Ready to take a challenge?

If you are thinking of taking part in a charity challenge in the Lake District, it is worth checking with the organisers of different charity challenges about training weekends offered before the actual event. They may be able to help you prepare.

Whatever you do, it’s important to work on your fitness level and complete all the necessary training walks so that you arrive well-prepared. Mountains can be an unforgiving environment, especially if you lose visibility.

Check with the organisers for a full list of the equipment and food you need to bring, together with recommended suppliers, and be sure to check out our preparation guide. You might be able to get a discount by mentioning you plan to complete a particular charity challenge. 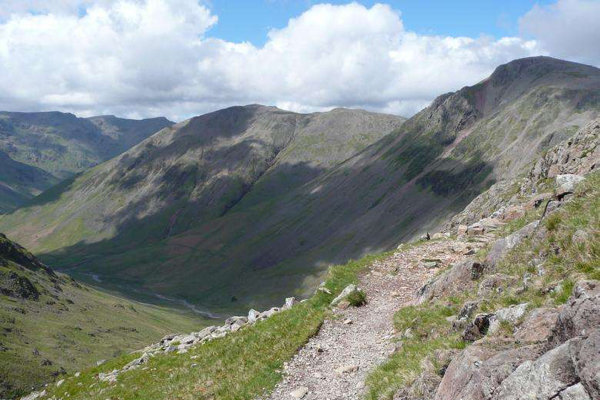